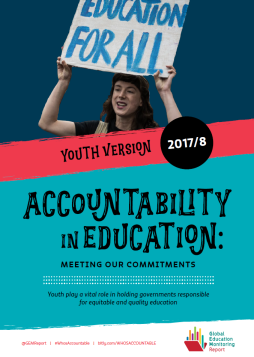 The youth version of the 2017/8 Global Education
Monitoring (GEM) Report on accountability was released today.  It contains a call to action in the form of a global campaign, #WhosAccountable, to support the enforcement of

people’s right to education ahead of Human Rights Day, celebrated on December 10.

The fifth Youth Report produced by the GEM Report team continues the tradition of asking young people to give their take on the 2017/8 GEM Report’s key findings. It shows that youth play a vital role in holding governments accountable for equitable, quality education.

Everyone has a role to play in improving education

It would be easy to sit back and assume that achieving equitable, quality education for all is up to governments and international organizations. However, young people have responsibilities in

education too.  “Our education system is a framework or a puzzle where each actor has its role, and when one of them breaks the chain, the whole system is impacted” explains

Filomena a high-school student from Brazil. For example, students have to turn up to classes, adhere to codes of conduct on good behaviour and focus on learning. Just as governments should be held to account for meeting their responsibilities, students shouldn’t be let off the hook for theirs.

Students also play an important role in holding others to account if they fail to meet their responsibilities. This includes being part of social movements and protests and getting involved with higher education governing boards and committees.

Students on the frontline

In Chile, students began protesting the privatization and socio-economic segregation of education in 2006. As a result, the current government introduced the biggest education reforms in 30 years, aiming to counter some of the worst consequences of privatization. In 2016, free tuition was extended to poorer students attending some types of tertiary education institutions.

“For those students who are thinking about standing up for their right to education, there is no one recipe,” said Camila Cociña, who participated in the student movement in Chile. “The only way to trigger deep transformation is to get organized, think collectively, identify key demands, and build momentum through different means: occupying the streets, negotiating with stakeholders, discussing, convincing and learning. In a collective endeavour like this one, everyone is necessary, but no one is indispensable.”

The #FeesMustFall protests that took place in 2015 in South Africa were the largest national student uprising since 1976 and denounced the fact that the poorest were being left out of financial aid for higher education. The protests led to a freeze in tuition fees and an inquiry into possible solutions. One of a set of recommendations published in November 2017 foresees the establishment of student loads that would only be reimbursed once a graduate’s income reached a certain level.

“Progress is never as far away as you might think,” said Dylan Barry, who headed the Economic Research task team of the #FeesMustFall student protest at South Africa’s University of the Witwatersrand in 2016, and wrote for this blog before. “The struggle to fix our higher education system continues, but the #FeesMustFall protests illustrated the power that students still have.”

Students can represent their peers in school affairs

Councils often provide a space to discuss and sort out problems. These may include school lunches, student behaviour or ideas for fundraising events. When students sit on university committees, they can help voice student concerns and take part in decision-making. Most governing bodies of institutions in the European Higher Education Area include elected student representatives. Students are also increasingly involved in decision-making in higher education in other parts of the world. An analysis of 20 flagship African universities found students were represented in at least two-thirds of councils and senates. Many universities are also required to have students on boards as part of their quality assurance mechanisms. 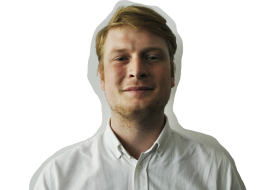 “As part of the student movement at the University of Oslo, across the student body in Norway and now as a representative of European students, I have learned that there is a lot that can be changed for the better when we actively take part in de­cision-making,” said Helge Schwitters, the President of the European Students’ Union and a student at the University of Oslo, Norway. “Over the years I have been able to shape the ethical conduct at my university, to successfully stop tuition fees for international students, and to make several minor improvements that inform the day-to-day learning process of students, such as bridging gaps between academic staff and students. I am convinced that students’ presence in decision-making improves higher education for our societies, ourselves and those who come after us”

Read on… The new youth Report also features sections showing students how their teachers are held accountable, who makes sure their schools are good quality, how accountability mechanisms help show whether universities are good or not, and how to know whether international scholarships are fit for purpose.

This is just the beginning…

The 2017/8 Youth Report contains an important call to action for all young people who have a responsibility to speak out when their rights or the rights of others to education are violated. It sparks the launch of a campaign calling governments to make the right to education enforceable in national law in all countries. Currently this is the case in only 55% of countries. Find out more and join our #WhosAccountable campaign.