This blog is written by Dr. Emma Rowe, Lecturer in Education in the School of Education, Deakin University, and the author of a case study on accountability and education in Australia commissioned for the 2017/8 GEM Report. The blog is part of a series showing that accountability in education is shaped by a country’s history and political, social, and cultural context.

Australia’s education system is fundamentally centralized. Central bodies (federal or state) fund schools and make key decisions on curriculum. However, decentralization of schools has remained the over-arching goal of successive governments.  The 2004 Act stipulates that schools maintain the authority to recruit their own staff, develop their own school charters, elect independent school councils and operate and determine their own budget. In 2014, the federal government legislated Independent Public Schools with the aim to make one-fourth of public schools in Australia autonomous and decentralized.

Politicians and policy-makers tend to regard the improvement of standardized test results as the primary challenge. The 2013 Act aims ‘for Australia to be placed, by 2025, in the top 5 highest performing countries’ in terms of OECD PISA results. However, the Federal Review of Funding also found a ‘significant gap between the highest and lowest performing students in Australia, relative to other OECD countries’, estimated at 3 to 3.5 years. Schools significantly influence student educational outcomes due to clustering of low socio-economic status students. Rural and remote schools are more likely to serve lower socio-economic status cohorts of students, and struggle for resources, including experienced teachers. And almost half of Australia’s population consists of first- or second-generation migrants.

A primary stated aim for Australia is to achieve high-quality and high-equity education and to be competitive within the global landscape. Our current policies around accountability are designed in such a way to meet this objective. But these policies rely heavily on standardized testing and utilize punitive means of accountability. A penalizing system of accountability exacerbates equity gaps. 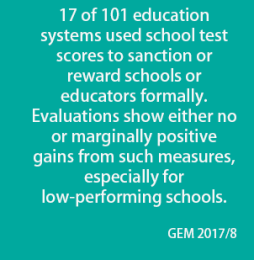 In comparison to the United States and England, Australia was a relative late-comer to the introduction of accountability policies in education, such as standardized national testing, and linking national testing to public reporting and comparisons of school-based test results.

These reforms were first initiated in 2008-2013 and have been extended since by federal governments. A 2008 Act established the Australian Curriculum, Assessment and Reporting Authority (ACARA), which is responsible for the governance of major accountability policy drivers, including:

Through these initiatives and new governance bodies, it is relatively straightforward to identify the confluence of performance-based data, as tied to individual schools, teachers and students. The standardization of the curriculum enables large-scale standardized testing at common age points.

During this period, Australia also shifted towards a greater reliance on punitive methods of accountability. Schools and teachers were held accountable for standardized test achievement and a school’s performance was tied to rewards and penalties.

Under a number of national agreements (2009-2013), each state or territory education department was required to set performance targets according to NAPLAN results and the national minimum standard benchmark. They would then be audited to determine whether they had successfully achieved their performance target.

If it had under-performed relative to the performance target, the respective department of education would not receive its full allocation of funding (and schools would also not receive their full funding).

Public schools, which enrol 65% of students, were particularly damaged by the policy. They predominantly do not charge fees (although there are exceptions) and receive most funding from the state government. Public schools also predominantly educate the higher proportion of lower socio-economic status students. By contrast, private schools receive most funding from the federal government and educate mostly higher socio-economic status students. Public schools tend to be more vulnerable within a competitive market (except for those that have selective admissions). If funding, staffing and resources maintain disparities, Australia will struggle to achieve both quality and equity and will struggle to remain globally competitive.

Evidence suggests that accountability measures (particularly when utilized to sanction 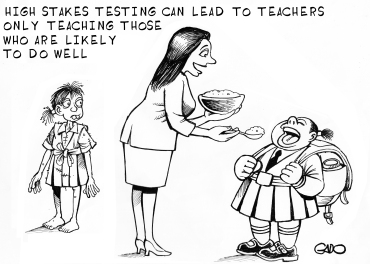 and penalize schools and staff) do not lead to increased student outcomes. Rather, a penalizing approach can increase the achievement gaps between high and low performers, as evident in Australia.

Government-initiated reports have recommended that ACARA strengthen its powers, particularly within the remit of teacher quality and initial teacher education, and ACARA was endorsed for another six-year period in 2015. Potentially positive directions include the recent overhauling of needs-based funding, although private school funding continues to be securely and safely anchored by the federal government.

See the full set of blogs in this series