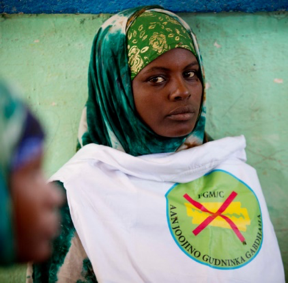 There are approximately 45 million girls of primary and secondary school age not going to school in sub-Saharan Africa according to the UIS – more than in any other region. Our 2017/8 report showed that across 18 countries in the region, gender-based violence, as measured by intimate partner violence, early marriage and female genital mutilation, was one of the factors that pushed girls out of school. It’s time for these abhorrent practices to stop.

Female genital mutilation/cutting (FGM/C) may not seem a large-scale problem. Yet, while the exact number of girls and women worldwide being subjected to the practice remains unknown, what we do know is that at least 200 million girls and women in thirty countries have been victims of the practice, with the highest concentrations in sub-Saharan Africa. In some countries, such as Somalia, for instance, 98% of girls and women, aged 15 to 49 years have undergone FGM/C.

With large scale migration, the practice is not confined to poor countries. For example, in the past year, 9,000 cases were attended to by the National Health Service of the United Kingdom and cases have almost tripled since 1990 in the United States. While the prevalence is falling worldwide, sadly the number of cases may still rise due to population growth. If current trends continue, 15 million more girls between ages 15 and 19 will be subjected to the practice globally by 2030.

Due to deeply entrenched social and cultural practice in many places, it is commonplace for girls aged below 10 years to be pulled out of formal education, and forced to take part in sometimes heinous traditional female initiation ceremonies, such as cutting. In many contexts, the social norm upholding the practice is so powerful that families have their daughters cut even when they are aware of the long-term physical harm it can cause. Indeed, as reported in a UNICEF report, there is a high degree of discrepancy between the low support for FGM/C and the high prevalence of its practice. This just goes to show the strength of a tradition, and the extent of the battle ahead of us if we are to stop it.

Educating communities can help question the rationale behind these archaic traditions and reinforce the arguments against them, especially when talking to men. “Our parents aren’t well enough informed. They think that excision enables a girl to abstain from sexual relations until her marriage,“ said Oumou Barry, former president of a girls’ club in southeast Senegal.

Educating girls can also give them the freedom to make decisions to improve their lives, which has deep social implications. Giving girls access to schooling is a central part of eradicating FGM/C, according to our 2016 Gender Review, which shows that, in most countries, women with

higher levels of education are less likely to have undergone FGM/C. By imparting literacy, education also facilitates women’s access to information about social and legal rights and welfare services. Learning to read and write can bring greater confidence and agency to identify and challenge inequality throughout society. For instance, just as with FGM/C, low levels of education are a significant risk factor in perpetuating and experiencing intimate partner violence.

The relationship between education and gender-based violence is mutually reinforcing

As the 2016 GEM Report confirmed, mothers’ experiences with, and attitudes towards, gender-based violence matter for their children’s education outcomes, which education can help with. A mother’s acceptance of violence while arguing with her husband is associated with the daughter’s lower school attendance. In Comoros, Mozambique and Sierra Leone, the probability of attending school was, respectively, 42%, 25% and 15% lower for girls whose mothers justified intimate partner violence than for those whose mothers did not justify it.

Gender-based violence and FGM/C affects millions of children worldwide, violates children’s fundamental human rights, and is a form of gender discrimination. It is a barrier to education that we can address.

Numerous international non-government organizations, governments and advocacy groups have called for an end to FGM/C. For instance, just last month, UNFPA’s country director of Nigeria, which accounts for about one-quarter of the estimated circumcised women in the world, called on nationwide enforcement of laws prohibiting FGM. Part of their work in the country involves enlisting thousands of youths in Lagos as change agents to champion the government’s agenda of achieving a FGM free country.

So what action needs to be taken?

As part of these global efforts, the GEM Report is participating in the 16-day campaign of the Global Working Group to end school-related gender-based violence on the theme of “Teachers, Schools and Safe Spaces for Teaching and Learning: The imperative to end SRGBV.”

The upcoming 2018 GEM Report Gender Review due out on 8 March will further investigate challenges and progress related to boys’ and girls’ education.